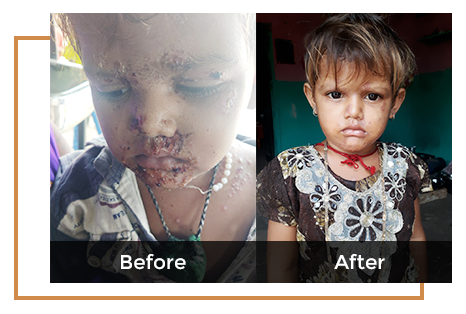 3 year old Kajal lives in the coastal village Chanch near GHCL Salt works in Gujarat. Her parents are labourers and her old grandmother takes care of her at home. Some time back Kajal was suffering from chickenpox. Her family believed that it was ‘SHITLA MATA ROG’, an ailment due the wrath of Goddess Shitla mata, and they tried many home remedies. They thought she would recover within five days but, eight days passed and the infection spread to her chest, eyes and head. Her skin was dry and she was unable to eat or sleep and became restless.

Her family could not afford the treatment of a doctor nor suffer the wage loss for taking a day off for visiting the doctor. So, they waited for GHCL’s Mobile Dispensary to visit their village.

When GHCL Foundation’s Doctor examined her, some of the boils were bleeding and her condition was very bad. The medical team cleaned the infected area with boiled water, applied antiseptic ointment, gave medicines and advised precautions. Within two visits to the mobile dispensary Kajal started showing signs of recovery.

This incident completely changed her grandmother’s perception. Kajal’s grandmother now believes in medicines and doctors. In fact, she is a change agent now. She advises the villagers to seek medical advice and treatment rather than blindly believing in superstitions and quack remedies.