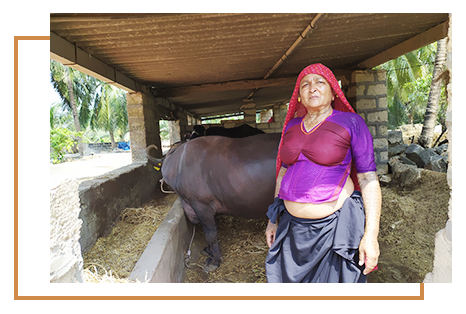 Rakhuben resides in the coastal village Vadodara Zala near GHCL Soda Ash plant, Sutrapada, Gujarat. She lives in a joint family with her two married sons, grand son and husband. This is a marginalized farmer family and depends on agriculture and animal husbandry. They have two buffaloes and a calf and a cow. Since long Rakhuben and her daughter in law Dharmistha used to look after the cattle in the traditional way of caring for milch cattle, but were unable get an appropriate return for the hard work.
Almost three years ago, Rakhuben met the women members of Cattle Feed Centre operated by Navdurga Mahila Vikas Mandal, a women’s Self-help Group promoted by GHCL Foundation. There she learnt about balanced nutritional cattle feed. Rakhuben became an active member of Navdurga Mahila Vikas Mandal inspired by GHCL Foundation participating regularly in meetings, trainings and exposure tours under the GHCL animal husbandry development program. She received scientific training on cattle care from experts in the field. Under the guidance of Rakhuben, her daughter in law Dharmishtha too started taking care of cattle and giving them balanced nutritious food. Very soon, the quality and quantity of milk production began to improve significantly.
Gradually, the fate of milk also increased from Rs 6.5 to Rs.8/- per litre, thus improving their income. With balanced food and nutrition, a buffalo which was unable to conceive, now became pregnant.
Dharmishtha said “with this change we are very motivated and hopeful. In future, we will add new cattle to our business.” Rakhuben said “Thanks to GHCL Foundation for providing such training, guidance on balanced nutrition food and its availability at subsidized rate at our village.”