Kiran says “farming is the way of living my life”

Kiran says “farming is the way of living my life” 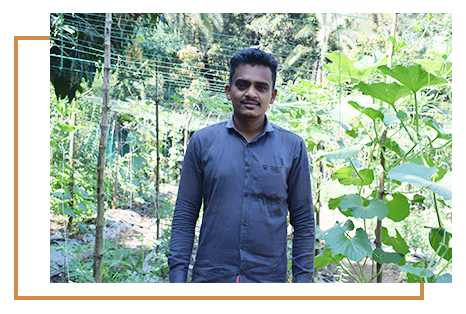 Kiran Patel lives in Borigaon, a village near GHCL Home Textile division. After completing his education, he decided to find a job for himself so that he could support his family but was unable to find a suitable job opening for himself.
Kiran’s father was also not doing well in terms of health. He decided to support him by farming in his land. With very little knowledge of farming, Kiran continued his efforts based on the guidance given by other farmers. But soon he realised that even though he was investing enogh, he was not able to get the expected yield from the land.
One day along with other farmers from the village, Kiran participated in the meeting organised by GHCL Foundation Trust. During his interaction with the team members, Kiran got an insight into the organic and sustainable method of farming. Impressed by the idea, he went ahead and adopted the Organic agriculture program introduced by the Foundation Trust Agro team. Kiran also got support from the team in getting seeds, organic manure, and pesticides on a subsidised rate. With all this, support Kiran was able to understand the new concept of zero budget farming.
In the initial stage, Kiran was not very sure about his decision but once his crop was ready for harvest he was excited to see the results. The production was more than what he was expecting and the quality of the yield was great. Kiran was easily able to get a good rate for his crop.
Today Kiran feels very confident that he decided to go ahead with organic farming concept as suggested by the volunteers from the GHCL Foundation Trust. Usage of vermicomposting has made the soil of his land more fertile. Today he is confident and always feels great in sharing his experience with other farmers.
He says: “The foundation taught me the right way of farming. I love farming now and tell people that farming is the way of living my life.”