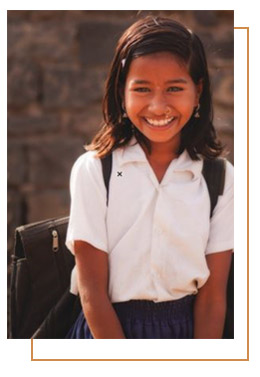 Kalpana Makwana, a teacher to students of grade 5-8 at the Government Primary school in Kathivadar village of Rajula District was on a special project on remedial education by GHCL Foundation Trust. She often noticed that all the students responded during the attendance in the school, but Wagh Jigna Nanabhai never responded when her name was called out during attendance.

“Jigu, as she was called, was always lost or preoccupied, sometimes distracted, never attentive.She was mostly silent in class and didn’t talk much. I realized that it would be difficult to educate her in the same way as other kids. If given love and compassion, there were chances of bringing a change.

So, I called Jigu and told her to oil her hair, clip her nails and dress properly and I would declare her the “Rose” of the class, honor her with three claps and write her name on the black board. She was overjoyed to hear this.

The next day, Jigu was neatly dressed but with unclipped nails and came to me crying. She said she did not have a nail clipper at home. So, I clipped her fingernails and toenails. Overwhelmed with joy, she ran to each class teacher showing-off her nails and said‘look my Kalpana Teacher has clipped off my weird nails’.

Gradually, Jigu started attending my classes. Sometimes she was fascinated by my purse and sandals and asked me to lend them to her. She would often imitate me in class too. I helped her develop an interest in studies. She could recite alphabets but had a problem writing them down. I taught her the basic alphabet. She learnt numbers from 1 to 70, names of days and months in Gujarati and English. She showed signs of academic improvement after attending my classes.

One day Jigu’s mother told me ‘Jigu has improved and upgraded a lot; she reaches school on time and has stopped troubling all of us at home. My Jigu is very calm and cleaver now’. Tears of joy rolled down her eyes. I was happy, I had never expected such progress.”