“I am not helpless” says, Devi

“I am not helpless” says, Devi 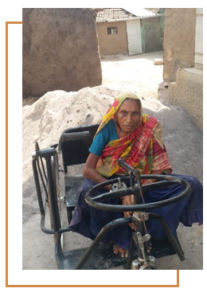 85 year old ‘DeviMaa’ lives in Garbha village in Gir-Somnath District close to GHCL’s Soda Ash division. ‘Devi Maa’ is a widow and suffers from a disability which has restricted her movement. She has two daughters who are married and two sons who work as daily wagers in city. ‘Devi Maa’ is an independent  woman and always that she can lead her life on her own without being dependent on anyone.

She lives alone in a kuccha house and even though her children are not living with her, she does not feel alone because she feels that she has her own identity in the village and has neighbours who are quite helpful. Devi Maa says “I am not helpless, the villagers look after me and with the ration kits I get from GHCL, every month I can sustain myself with dignity. In addition to that, I got a tricycle from GHCL and now I can move around easily. GHCL’s mobile dispensary also visits us every week and any health problems I may have are looked into”.

Just like Devi, there are many destitute and elderly people who want to continue living in the village because they have their community there and have spent their entire lives in the village. GHCL Foundation Trust delivers ration kits on a monthly basis to all such elderly people living in its CSR villages so that they may live a life of dignity. With the ‘Zero Hunger’ and Good Health and Well Being”, Social Development Goals, in mind, GHCL Foundation Trust reaches out to the old and destitute people like Devi Maa to make sure that they can live the rest of their lives being healthy and with dignity.