Ranjibhai after finishing his graduation started his first job in a transport firm where he was looking after various portfolios but at a very meagre salary of Rs. 2000/- per month. With time, his salary increased to Rs.5000/- per month but still it was very difficult for him to meet the expenses back home.

Ranjibhai also owned 5 acres of farmland, but as it was not cared for, that too was giving very less returns. One day Ranjibhai decided to purchase a buffalo. After buying the buffalo, he realized that he had no knowledge of cattle care and the breeding methods. 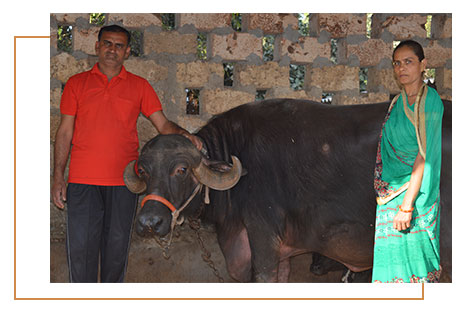 At GHCL Foundation Trust Ranjibhai met a veterinary doctor who advised him to buy a ‘Jafarabadi breed’ of buffalo if he wanted to earn good returns. As suggested, he bought the Jafarabadi buffalo by investing Rs. 26000/-. He was also given support through various training sessions on how to care for the cattle, what to feed and the breeding method.

He followed the diet suggestions and fed his buffalo a combination of Jiggery and Ghee, Raajdan (nutritious grains), Amul’s  Khol (Olicake). Slowly his care started giving him good returns. He was earning a lot more than what he had invested in buying the buffalo. Today Ranjibhai owns 5 buffalo of the same breed and every month he is earning Rs. 1,20,000/- only by selling milk from these buffaloes.

Ranjibhai plans to buy few more buffaloes as he wants to support his children’s education with the profits from selling milk.

He is very thankful to GHCL Foundation and often says – “GHCL Foundation had supported me to become an entrepreneur at every step. The foundation gave me a lot of support that I needed in terms of knowledge, exposure, training, subsidized inputs etc. for effective cattle care”.